The Dilemma by B.A. Paris out now in hardback

The Dilemma, by Sunday Times bestselling author B.A. Paris, is out today in the UK in hardback. The Dilemma has already become a top 10 ebook bestseller after early eBook release last month.

A couple are faced with an impossible choice -- be honest, no matter how terrible the truth is, or give the person you love a few extra hours of happiness?

The Most Commercial Agency in London Lives Up to Its Reputation

This week on the UK bestseller charts, the No.1 commercial agency in London, Darley Anderson Literary, TV &Film Agency, has three authors in the Top 10.

With her nail-biting new thriller, Bring Me Back, B A Paris comes in at No.9 on the paperback charts, with John Connolly's searing Charlie Parker novel A Game of Ghosts coming in at No.10.

On the hardback bestsellers, Chris Carter's Gallery of the Dead rockets back into the charts and into the No.10 spot.

An outstanding achievement for all. Awesome.

We are thrilled to announce that two of our authors have been nominated for a Goodreads Choice Award 2017!

The voting closes for the first round on 5th November. Over 1 million votes have already been cast.

Vote here for our authors. Congratulations to all!

We are so thrilled to announce that BA Paris has shot into the New York Times bestsellers chart - with two of her titles!

The Breakdown hardback novel went straight to No.10 while the paperback of the international bestselling Behind Closed Doors shot to No.5.

This is such a fantastic achievement, congratulations BA Paris!

The Breakdown out today!

If you can't trust yourself, who can you trust?

The highly anticipated second novel from B.A. Paris, The Breakdown, is published today! It's a heartstopping thriller with a twist you won't see coming.

Last month, B.A.Paris'  first novel, Behind Closed Doors, was awarded the Nielsen Gold Award for selling over 500,000 copies in 2016.

Let's do it again with The Breakdown.

We are absolutely thrilled that Behind Closed Doors, the debut novel from B.A. Paris, has been voted as one of 2016's best books!

On Amazon's 10 Best Books of 2016, Behind Closed Doors charted at No.7 on the list, voted for by customers, alongside powerhouse titles Harry Potter and the Cursed Child, Deliciously Ella and Lean in 15: The Shape Plan.

Behind Closed Doors has also been voted the Best Thriller of 2016 by iBooks US and is one of the iBooks UK bestselling titles of 2016, featuring alongside The Girl on the Train and Me Before You. 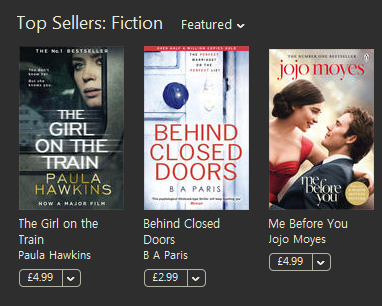 The thriller is also No.3 on Kobo's Best Selling Books 2016  which is based on their reading data accumulated in 2016.

This is such a phenomenal achievement for any author, and almost unheard of for a debut.

We are so proud, congratulations B.A. Paris!

Behind Closed Doors is a New York Times Bestseller!

We are utterly thrilled to announce that our debut author, B A Paris, is a New York Times Bestseller!

Her novel Behind Closed Doors, published by St. Martin’s Press, has rocketed to No.15 after her first week of sales. An incredible achievement for any author but even more special for a first time author.

So many congratulations, B A Paris. We are a very proud agency!

Behind Closed Doors is Kindle's No.1!

The bestselling psychological thriller, Behind Closed Doors, from incredible talent B.A. Paris has been revealed as Amazon Kindle's number-one selling e-book this year to date.

As well as astonishing readers in the UK, Behind Closed Doors will be available in 32 international editions. It reached the No.1 spot in Iceland in June.

B.A. Paris' debut novel sells over half a million copies

Debut author, B.A Paris, has this week sold over half a million copies of her bestselling thriller, Behind Closed Doors.

Released in February, over 500,000 copies have been sold in just 15 weeks since publication.

This is a rare feat for a debut author to achieve, even rarer to do so in such a short space of time.

Behind Closed Doors firmly remains on the UK bestsellers list and in the Top 20 of the Amazon and Kindle charts 16 weeks after publication.

So many congratulations, B.A Paris. Roll on a million.

Stone Village Productions have optioned the film and TV rights to the B.A. Paris #1 UK Kindle Bestselling novel Behind Closed Doors for a high six-figure sum.

Published in the UK by Harper Collins’ Mira imprint, the novel sold over 100,000 copies in its first 3 days of publishing and so far has sold into 10 foreign language territories.

The debut novel from Paris is about a couple with the perfect marriage, built on a terrifying secret. The honeymoon, after their idyllic wedding, kicks off a nail-biting pursuit with twists and turns that make you wonder what really happens with your married friends and neighbours, behind closed doors.

Stone Village Productions have produced a string of literary adaptations including The Lincoln Lawyer, The Human Stain and Love in the Time of Cholera. Currently they are developing Emily St John Mandel’s Station Eleven, and Nabokov’s Laughter in the Dark, both for feature.

We are delighted to welcome début author, B.A. Paris, to the Darley Anderson Agency.

Saving Grace is a chilling psychological thriller perfect for fans of domestic noir. Sally Williamson, editor at MIRA, snapped up UK & Commonwealth rights and will publish in January 2016.

Grace and Jack Angel have the perfect life. Thirty-three-year old Grace is kind, loving and attractive. And she has Jack. Not only is Jack handsome and charming but he is a renowned lawyer dedicated to saving women from abusive relationships.

But you should never trust perfection.

What if you took a step back and really thought about Grace and Jack Angel. Would you question why Jack had never had a relationship before now? Would you question how Grace eats so much but never puts on weight? Would you ask the real reason their beautiful home is fitted with those metal security shutters?

The simplest way to get answers would be to just ask Grace, but then you realise: Grace Angel is never, ever seen without Jack right by her side…

B.A. Paris was born in 1958 was brought up in England and moved to France when she was 21.She spent some years working as a trader in an international bank before re-training as a teacher. She taught for several years in the International Department of a local school and then at the Université de Marne la Vallée before setting up a language school with her husband. She and her husband still live in France and they have five daughters.

Welcome to the agency, Bernadette!

Bring Me Back is out today in the US!

Bring Me Back, the third novel by the million-copy bestselling author B A Paris, is out today in the US!

Bring Me Back was a Sunday Times bestseller when it was released in the UK in March. It tells the story of Finn, who discovers signs that his ex-girlfriend Layla is back -- but Layla vanished 12 years ago, and now he's engaged to her sister.

Bring Me Back by B A Paris is out today!

Bring Me Back, the highly-anticipated third novel from million-copy bestselling author B A Paris, is out today!

When Finn starts finding some mysterious Russian dolls, which his ex-girlfriend, Layla, collected, he knows immediately that someone wants him to believe that Layla is back. But Layla disappeared 12 years ago, presumed dead, and he's just announced his engagement with Layla's sister, Ellen. In Bring Me Back, Finn tries to get to the bottom of this disturbing mystery - and in true B A Paris style, is absolutely unputdownable.

The paperback of Behind Closed Doors, the smash-hit debut from B.A. Paris, re-entered the New York Times Bestsellers chart last week at No.10 and has this week climbed to No.8!

The Breakdown is a bestseller!

We are thrilled to announce that The Breakdown, the second novel from internationally bestselling author B.A. Paris is a No.11 UK bestseller!

A massive congratulations to B.A. Paris!

The début phenomenon of 2016, Behind Closed Doors, was awarded the Gold award Nielsen | Specsavers Bestseller Awards for sales of 500,000 copies.

B.A. Paris was the only début fiction author to win a Gold award as well being one of the few début authors to receive a prize.

A massive congratulations to B.A. Paris and here’s to the many more successes to come.

Behind Closed Doors is a New York Times Bestseller...Again!

Behind Closed Doors is No.3 on the NYT Ebook Bestsellers and is No.15 on the Ebook and paperback combined Bestsellers list.

Behind Closed Doors published in the US

The can't-put-it-down thriller of the year, Behind Closed Doors by debut author B A Paris, is published by St. Martin's Press in the US today!

The first foreign edition of Behind Closed Doors is this week No.1 on the Iceland overall bestsellers list.

The publisher shared pictures last week of Icelandic readers relaxing on sunloungers, completely engrossed in the novel, showing it is one of this year’s top picks for holiday makers.

N29/ Drápa only acquired the title in April and published in May, and now has a number one hit in June.

Huge congratulations to B. A. Paris, we can’t wait for the rest of the world to read this book.

Behind Closed Doors published in Iceland

The first foreign edition of the super-hit Behind Closed Doors by B.A. Paris was published yesterday by N29.

The Icelandic publisher has moved incredibly quickly, having only acquired the title in April, adding more momentum to the debut author’s runaway success.

Behind Closed Doors has sold just under half a million copies in the UK since its February release and currently has 2777 five-star reviews on Amazon.

The title will be translated into a further 28 languages with this figure set to rise.

As a result of a fantastic Frankfurt Book Fair, the Rights team have just closed some very exciting deals for two of our authors.

We also delighted to announce that Italian rights in Emma Kavanagh’s second stand-alone thriller, Hidden, were sold to Newton Compton.