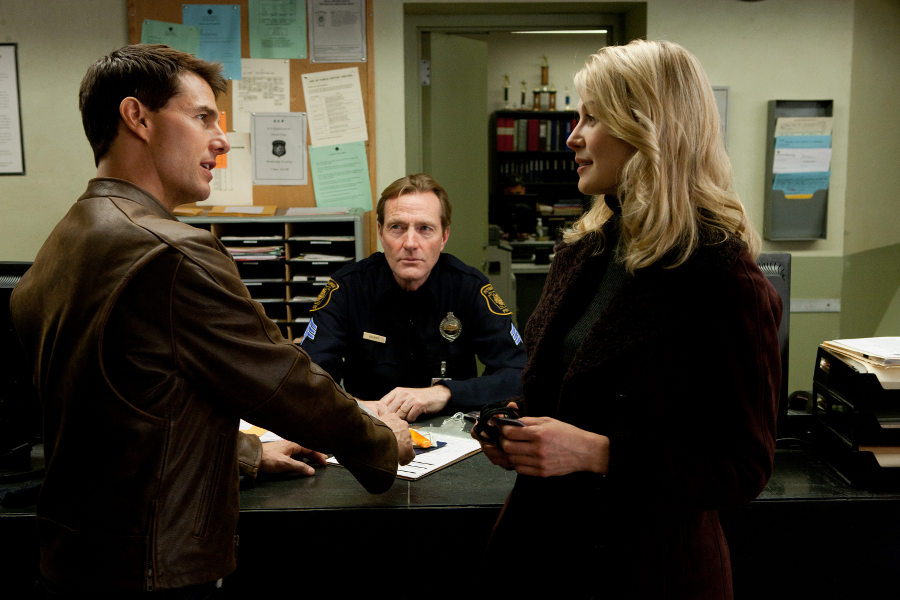 With excellent relationships with producers in the UK and internationally, we look to place material in the hands of brilliant and passionate industry professionals with the vision and determination to get out authors' books adapted for the screen.

Darley Anderson handles dramatic rights for some authors. In 2013, he brought Dramatic Rights Agent, Sheila David, into the Agency.

Since coming in-house in 2013, Sheila has set up film and tv options for many Agency authors, orchestrating deals direct to studios and to independent TV and Film producers around the world. This year we have projects for film and tv at all stages: in active development, in production, in post-production and being broadcast on prime time TV.

In LA, the Agency has an excellent twenty-year relationship with US Talent Agent Steve Fisher at APA. They have successfully set up projects with major Hollywood Studios who have produced films starring A-list talent such as Tom Cruise (pictured) and Kevin Costner.

Trailer and release date for Beth O’Leary’s THE FLATSHARE!

The hotly anticipated adaptation of Beth O’Leary’s best-selling novel THE FLATSHARE has released not only its first trailer, but a release date to go alongside it!

Tiffy Moore needs a cheap flat, and fast. Leon Twomey works nights and needs cash. It's the perfect solution: Leon occupies the one-bed flat while Tiffy’s at work in the day, and she has the run of the place the rest of the time. But with obsessive ex-boyfriends, demanding clients at work, wrongly-imprisoned brothers and, of course, the fact that they still haven’t met yet, they’re about to discover that if you want the perfect home you need to throw the rulebook out the window...

Developed by 42 Productions and starring Jessica Brown-Findlay (Downton Abbey) and Anthony Welsh (Hanna, Fleabag) THE FLATSHARE comes to Paramount+ in the UK on December 1st and will be a six-part series. Head online to see the tantalising first trailer!

YOU DON'T KNOW ME Presides in Netflix Top-10!

Accused of murder, Hero shouldn’t stand a chance in court. He swears he’s innocent. But in the end, all that matters is this: do you believe him?

The adaptation of Imran Mahmood’s YOU DON’T KNOW ME was developed by Snowed-In Productions for the BBC, before moving over to Netflix where it reigned in the top-10 across both June and July 2022.

YOU DON’T KNOW ME is now streaming on BBC iPlayer and Netflix internationally.


As Kate, her closest friends and their families all gather for their dream luxury holiday, a dark secret threatens to tear the serenity of sunny Provenance apart: Kate suspects that her husband is having an affair, and that the other woman is one of her best friends. With Kate closing in on the truth, it becomes clear that some things are better left unsaid…


Because someone in the villa may be prepared to kill to keep their secret hidden.


T M Logan’s book THE HOLIDAY has sold over 500,000 copies and is a Nielsen Gold Award Winning Title.

Based on the novel of the same name, TM Logan’s THE HOLIDAY was produced by Projector Pictures and broadcast on Channel 5 in Spring 2022. The adaptation stars Jill Halfpenny (Waterloo Road, Eastenders), Owen McDonnell (Killing Eve). As reported in Broadcast this June, it has consolidated viewing figures of 3.8 million.

Hot on the heels of this, C5 have commissioned THE CATCH, a primetime drama based on TM Logan’s Sunday Times Bestselling novel, also from Projector Pictures, a BAFTA nominated independent production company. More news on cast and location to come soon!

Cardiff based Bad Wolf Productions – the international drama production company behind His Dark Materials, Industry, A Discovery of Witches and the forthcoming regeneration of Doctor Who for 2023 - have optioned the dramatic rights in Beth O’Leary’s bestselling novel THE NO-SHOW from Sheila David of Darley Anderson Literary, TV & Film Agency.

In THE NO-SHOW, three women who seemingly have nothing in common find that they’re involved with the same man, with each of them being stood up on Valentine’s Day by the elusive Joseph Carter. O’Leary’s fourth Sunday Times bestselling novel, THE NO-SHOW is a joyful yet heartbreaking story about dating, and waiting, and the ways love can find us.

O’Leary’s books have been translated into over 30 languages and THE FLATSHARE has sold over a million copies globally. In the UK & Ireland, O’Leary’s novels have sold over 1.5 million copies. Each one has hit the Sunday Times bestseller lists in both hardback and paperback, and her debut, THE FLATSHARE, is currently in post-production with Paramount +.

The Imagination Box: A Mind Of Its Own by Martyn Ford
Exclusive TV rights rights sold to / under option