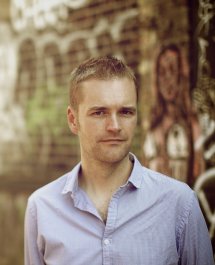 Never Coming Back, was a Richard & Judy Book Club selection in Autumn 2013, nominated for Crime & Thriller of the Year at the National Book Awards and was Apple iStore’s Best British Crime Novel of 2013. His most recent novel, I Am Missing, went straight to No.7 on the bestsellers chart and was nominated for the CWA Gold Dagger 2017.

He also has had great success with his missing persons podcast MISSING which has over 500,000 listeners and won a BIMA 2016 Award.

Tim was born in 1977 and brought up in Bath. After leaving school without any qualifications, he forged a successful career in magazine journalism.

He is married with a young daughter, and lives in Bath.

DAVID RAKER IS BACK WITH ANOTHER HEART-POUNDING MISSING PERSONS CASE

Just before the crash, Cate and Aiden Gascoigne are recorded on CCTV, laughing and happy. Then their car plunges into a ninety-foot ravine.

Within seconds, the vehicle is an inferno - and the Gascoignes are trapped inside.

But when fire crews arrive, they find something impossible:

The vehicle is empty.

Cate and Aiden have vanished.

And only missing persons investigator David Raker can solve the mystery . . .

Shadow at the Door

It's a night just like any other in the Conister home - but then Paul heads upstairs and never comes back.

When his wife Maggie goes to see where he is, she can't find him. His phone and wallet are by the bed. The windows are locked from the inside.

Missing persons investigator David Raker is an expert in locating the lost. So when he's hired by Maggie, he knows that in every disappearance - however impossible it seems - there's an answer.

What he doesn't know yet is that his search for Paul Conister will become linked to three other mysteries . . .

A night patrolman on the London Underground makes a deadly discovery.
A cold case is reopened - but the key witness appears to no longer exist.
And thousands of miles away, a random shooting may not be random at all.

David Raker is key to unlocking the truth . . .

Rebekah Murphy knows too much . . .

She knows she's alone on an abandoned island with a killer on her trail.
She knows that to get home, she must live to understand why this is happening.
She knows someone tried to kill her for a secret.

What she doesn't know is what that secret is . . .

What he does know is that he retires in one week - and if he doesn't find out where Louise went, no one will . . .

What neither Rebekah nor Detective Travis realize is that each holds a missing piece from the same puzzle - and it will cost them everything to finally solve it . . .

But by the next morning, they had disappeared without a trace.

No bodies, no evidence, and no clues.


Two and a half years later, it remains a mystery.

Desperate for answers, the families of the missing turn to investigator David Raker.

How did an entire village vanish overnight?

And is he looking for nine missing people, or nine dead bodies?

But now you're back.

A woman walks into a police station.

She has no phone and no ID, just a piece of paper that reads 'David Raker'.

She says she's his wife.

She knows everything about him.

But David buried his wife eight years ago.


Is this really the woman he loved?

Did he really say goodbye?

Or is he losing his mind?

When a young man wakes up bruised, beaten and with no memory of who he is or where he came from, the press immediately dub him 'The Lost Man'.

Ten months later, Richard Kite - if that is even his real name - remains as desperate as ever. Despite appeals and the efforts of the police, no one knows this man.

Kite's last hope may be private investigator David Raker - a seasoned locator of missing people. But Raker has more questions than answers.

Who is Richard Kite?

Why does no one know him?

And what links him to the body of a woman found beside a London railway line two years ago?

Where did she go?

What did she know?

A woman drives to a secluded beauty spot on the Somerset coast. CCTV watches her enter but doesn't see her leaving.

How can someone just disappear?

Her sister calls missing persons investigator David Raker. For him, the mystery of where she went is only the start. The real question is why a woman with no reason to run would choose to leave her entire life behind?

Was it her decision? Or did someone make it for her?

Raker is an expert at following the echoes of decades-old lies. But only Lynda Korin knows the most shocking secret of all - and she's missing, presumed dead...

When all has been lost what is there left to find?

Colm Healy used to be one of the Met's best detectives. Until, haunted by the unsolved murders of a mother and her twin daughters, his life was left in ruins. His failure to find an elusive killer - or even a motive for such a merciless crime - consumed him, his career and his family.

Missing persons investigator David Raker is the only friend Healy has left. The only one who understands that redemption rests on solving these murders. As they reopen the investigation together, Raker learns the hard way how this case breeds obsession - and how an unsolvable puzzle can break even the best detective.

Their search will take them down a trail of darkness, unravelling a thread of tragedy spanning years, and will force them to sacrifice everything they have left...

You don’t really know anybody. Not even the ones you love…

When Leonard Franks and his wife Ellie leave London for their dream retirement on the seclusion of Dartmoor, everything seems perfect. But their new life is shattered late one afternoon when Leonard leaves the house to fetch firewood. And never returns.

With the police investigation at a dead end, Leonard’s family turn to David Raker, a missing persons investigator with a gift for finding the lost. But nothing can prepare Raker for what he's about to uncover.

Because, behind this disappearance lies a deadly secret. And, by the time Raker starts to approach the truth, it's not just him in danger, it's everyone he cares about.

A SECRET THAT WILL CHANGE LIVES FOREVER


It was supposed to be the start of a big night out. But when Emily Kane arrives at her sister Carrie's house, she finds the front door unlocked and no one inside. Dinner's cooking, the TV's on. Carrie, her husband and their two daughters are gone.


When the police draw a blank, Emily asks missing persons investigator David Raker to find them. It's clear someone doesn't want the family found.


But as he gets closer to the truth, Raker begins to uncover evidence of a sinister cover-up, spanning decades and costing countless lives. And worse, in trying to find Emily's missing family, he might just have made himself the next target ...

No life is perfect. Everyone has secrets.

For millions of Londoners, the morning of 17 December is just like any other. But not for Sam Wren. An hour after leaving home, he gets onto a tube train - and never gets off again. No eyewitnesses. No trace of him on security cameras. Six months later, he's still missing.

Out of options and desperate for answers, Sam's wife Julia hires David Raker to track him down. Raker has made a career out of finding the lost. He knows how they think. And, in missing person cases, the only certainty is that everyone has something to hide.

But in this case the secrets go deeper than anyone imagined.

For, as Raker starts to suspect that even the police are lying to him, someone is watching. Someone who knows what happened on the tube that day. And, with Raker in his sights, he'll do anything to keep Sam's secrets to himself...

Vanished marks the return of an amazing new thriller talent - Tim Weaver is all set to become a household name in the world of suspense fiction.

A serial killer more terrifying than you could ever imagine . . .

Seventeen-year-old Megan Carver was an unlikely runaway. A straight-A student from a happy home, she studied hard and rarely got into trouble. Six months on, shes never been found.

Missing persons investigator David Raker knows what its like to grieve. He knows the shadowy world of the lost too. So, when hes hired by Megans parents to find out what happened, he recognizes their pain but knows that the darkest secrets can be buried deep. And Megans secrets could cost him his life. Because as Raker investigates her disappearance, he realizes everything is a lie.

People close to her are dead. Others are too terrified to talk. And soon the conspiracy of silence leads Raker towards a forest on the edge of the city. A place with a horrifying history which was once the hunting ground for a brutal, twisted serial killer. A place known as the Dead Tracks. . . .

"Perfect plotting, great characterisation and the kind of payoff that a thriller of this calibre deserves... " Book Geeks

"Raker is an excellent creation, the right amount of pathos and humility throughout, he is fast becoming one of my favourite lead characters in crime fiction." Guilty Conscience Blog

One year ago, Alex Townes body was found. One month ago, his mother saw him on the street. One week ago, David Raker agreed to look for him. Now hell wish he hadnt.

Mary Townes son, Alex, went missing six years ago. Five years later he finally turned up as a corpse in a car wreck. Missing persons investigator David Raker doesnt want the work. Its clearly a sad but hopeless case of mistaken identity brought to him by a woman unable to let go of her son. But haunted by a loss of his own, Raker reluctantly agrees.

For as he digs deeper, he discovers that Alexs life was not the innocent one his mother believed. Buried in his past are sinister secrets that were never meant to be found and dark, dangerous men are willing to kill to protect them.

Soon Raker will discover that there are things far worse than death...

"This impressive début delivers on pace and stomach-turning brutality, if not character... Fans of Mo Hayder will be in seventh hell."  Guardian

"A fantastic and gripping read as good as any début I have ever read." Goodreads