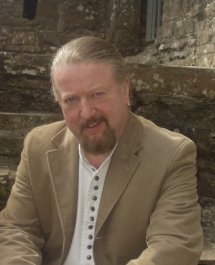 For many years Patrick Dunne worked for RTE as a producer but he has recently given up his job to write full time. Patrick has written two best-selling novels and lives in Ireland with his wife.

Chichen Itza the ruined Mayan city in the heart of the Yucatan. Site of the Pyramid of the Priest-King Kukulcan, of the Sacred Well of Sacrifice and the macabre Tzompantli the Skull Rack.

On the eve of the spectacular solar phenomenon at Chichen Itza TV producer Nick Goldberg is checking his arrangements for a worldwide broadcast of the event. Seconds later his headless body is catapulted down the steps of the pyramid, the whole event recorded by the horrified cameramen.

Florida born marine biologist Jessica Madison teams up with Ken Arnold, a specialist diver who has been asked by the local police to search the Sacred Well. The police believe Goldbergs severed head may have been cast into the well in imitation of an ancient Maya ceremony and that the atrocity is the work of local guerillas intent on avenging historic grievances.

Within days of her dive, Jessica is shocked to learn that Ken has died of a horrific mystery illness. Shes convinced that there has been a cover-up and sets out to discover what really happened. Her investigation leads her into the dark world of Maya rituals and a conspiracy of secrecy about a devastating illness plaguing the isolated communities in the interior of Yucatan.

But as she is on the verge of exposing those responsible for what has been taking place, Jessica makes another discovery that changes the scale of the threat entirely. Everything that has happened so far is just a prelude to a terrorist master plan and she must get to Florida before its too late.

Think ‘SEVEN’ Meets ‘THE NAME OF THE ROSE’

The body of a young woman is found in a church on the outskirts of Dublin. She has been gruesomely slain in some kind of ritual. A word scrawled in blood on her foot, a piece of Celtic jewelry and a sweet scented oil may be useful clues – or possibly decoys intended to confuse the investigation.

When journalist Jane Wade discovers that Father Lavelle, the Catholic priest who found the body, is an expert on religious cults she asks him to help find her sister, who may be a member of an organisation called The Keepers of the Seventh Seal. And their researches lead to unexpected discoveries connecting: an artist who specialises in grisly exhibits; the poetry of Yeats; a former colleague of Lavelle’s with sado-machochistic tendencies; a Doomsday prophecy in the United States, and an international singing star.

And mutual attraction leads them to fall in love.

DAYS OF WRATH is a closely woven murder mystery, an eerie journey through a labyrinth of bizarre beliefs and practices, and a suspense filled page-turner that builds to a nail biting climax.

A Carol For The Dead

The past always comes back to haunt us…

When a long-preserved female body is discovered in a peat bog close to Newgrange megalithic tomb, archaeologist Illaun Bowe hopes it will provide much needed scientific data on the pre-Celtic people who built the Boyne Valley necropolis.

The area where the body was found is steeped in stories of apparitions and supernatural occurrences that account for its Gaelic name – Monashee, The Bog Of Ghosts. Then Illaun’s inquiries about the sale of the land bring her into contact with an Order of nuns occupying a local abbey, a building with unusual medieval features that intrigue her.

But her curiousity is put on hold when another body is found at Monashee, killed in the same ritual way – except this victim is male and he has just been killed.

As mid-winter day approaches, Illaun discovers more about the grisly history of Monashee and becomes convinced that she is dealing with an ancient feud onto which more recent grievances have been grafted…

Her attempts to get to the truth will involve a perilous journey back to the Middle Ages and beyond, to a secret older than the Pyramids…

Excavating a plague graveyard in Castleboyne, Illaun Bowe is puzzled to find that a number of the victims interred there were not given a Christian burial.

On the last day of the dig, two lead coffins are found in a vault but there is an accident and a member of Illaun’s team comes into contact with the contents of one of them. He is soon dead from an illness with ominous symptoms and the town is gripped with fear that the Black Death has returned.

Meanwhile, a murder investigation is under way after the discovery of the mutilated remains of an African woman. It seems her body parts may have been taken for ritual purposes.

Amidst growing racial tension and threats to her own safety, Illaun begins to make connections between the town’s past and its present. At the same time, the arrival of a pathologist from South Africa causes friction in her relationship with her fiancé, Finian.

Once again caught at the heart of the situation, Illaun’s inquiries lead inevitably to an interface between the medieval and the modern worlds of sex and disease, religious devotion and primitive beliefs, prejudice and greed.

“An intriguing journey” Ireland on Sunday