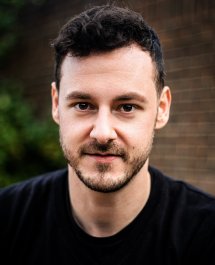 Martyn Ford is a journalist from Hampshire, where he writes for the Bordon Herald. His first book, It Happened to Me, a collection of shocking true stories, was published in 2010 by Summersdale. In 2011 Martyn’s TV script made it into the final stages of the BBC’s Laughing Stock Competition. Martyn also has four children's titles published by Faber Children's.

His first adult fiction title, Every Missing Thing, will be published by Thomas & Mercer in Autumn 2020.

All Our Darkest Secrets

He’d do anything to protect his wife. But what if that meant making the biggest mistake of all?

James Casper is one of the good guys. A DEA agent. A loyal husband. With his sights set on the man at the top of the city’s opioid crisis, James is about to make the biggest bust of his career.

Then his beloved wife Rosie does something terrible, and James must choose: report it—or help her. He knows how this works, and he tells himself he’s smart enough to get away with murder. But James’s worst enemy knows what they have done—and he won’t hesitate to use it to manipulate him.

James is dragged into a dark and dangerous world. As events spiral and loyalties are tested, he realizes there’s only one way out. And that is to be even more ruthless than the people he’s working for.

Whatever happens, no matter how far he falls, at least he’ll still have Rosie.

The boy who’s been missing for eight years. The girl who disappeared yesterday. The parents who claim innocence. And the man who believes them.

Ethan Clarke’s disappearance was a media sensation. Even now, years later, his name and his parents are synonymous with the mystery itself. And although the Clarkes seem to finally be settling into a life of ‘normality’, their fragile peace can’t last. Because the same thing happens to their daughter. Only this time, as the Clarkes are thrust back into the spotlight, the conspiracy theories make sense. This time, it’s hard to believe they’re innocent. This time, the truth is in reach.

Ex-detective Sam May is compelled to return to the case that transformed his life forever. All too aware of how much this pursuit has already cost, Sam embarks on a journey that’ll take him to the very depths of his own unwavering obsession.

Another child is missing. The clock is ticking. And the world is watching.