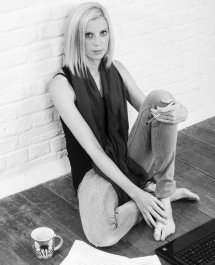 Lauren writes psychological suspense novels that delve into the darker side of relationships and families. She has a lifelong passion for writing, reading, and all things books. Lauren’s love of psychological suspense has grown since childhood and her dark imagination of always wondering what’s the worst thing that could happen in every situation.

Lauren studied psychology before moving to London where she lived and worked for many years. She now lives with her family in the Suffolk countryside. Readers can follow Lauren on Twitter @Lauren_C_North and Facebook @LaurenNorthAuthor

All The Wicked Games

IF YOUR BEST FRIEND WAS IN DANGER, YOU'D TRY TO SAVE HER...WOULDN'T YOU?

Are you ready to play?

Best friends Cleo and Rachel spend their evenings pretending to be people they're not, inventing elaborate stories to escape the monotony of their real lives. It's all harmless fun - until they play the game on the wrong person...

It's your move now.

Five years later, Cleo is still struggling to come to terms with the night that destroyed her friendship with Rachel and almost cost them their lives. And then she receives a text: Rachel is missing. Have you seen her?

There's only one person to blame.

Wracked with guilt for failing Rachel the last time they were in danger, Cleo races to find her friend. But could the past be repeating itself? Only this time, they're caught up in a far darker game.

The rules don't matter when the goal is revenge.

What if you left your child alone, and something terrible happened?

Anna James is an anxious mother. So when she has to leave eleven-year-old Harrie home alone one evening, she can't stop worrying about her daughter. But nothing bad ever happens in the sleepy village of Barton St Martin.

Except something goes wrong that night, and Anna returns to find Harrie with bruises she won't explain. The next morning a local businessman is reported missing and the village is sparking with gossip.

Anna is convinced there's a connection and that Harrie is in trouble. But how can she protect her daughter if she doesn't know where the danger is coming from?

Jenna is a wife, a mother, a doctor. She's also the victim of a stalker.

Every time she leaves her house, she sees him. Disturbing gifts are left at her door. Cruel emails are sent to her colleagues. She has no idea who this man is but she feels powerless against him.

Until the day he is brought into her hospital after a serious accident, and Jenna is given the chance to find out once and for all why this man is tormenting her. Now, the power is all hers.

But how many lines is she willing to cross to take back control of her life?

After the sudden death of her husband, Tess Clarke is drowning in grief. All she has left is her son, Jamie, and she’ll do anything to keep him safe – but she’s struggling to cope.

When grief counsellor Shelley knocks on their door, everything changes. Shelley is beautiful, confident and takes control when Tess can’t bear to face the outside world.

But when questions arise over her husband’s death and strange things start to happen, Tess begins to suspect that Shelley has an ulterior motive. Tess knows she must do everything she can to keep Jamie safe – but who can she trust?