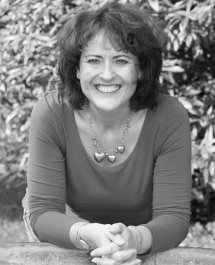 Kerry Fisher was born in Peterborough and studied French and Italian at Bath University. She lived and worked abroad as an English teacher, a holiday rep and grape picker before succumbing to getting a ‘proper job’ and returning to England. She studied Periodical Journalism and started at Essentials Magazine in London.

She now lives in Surrey with her husband, teenage son and daughter, and a very naughty labrador/schnauzer called Poppy.

The Woman in My Home

Finally, Cath has met someone: a man she loves, Robin, and who adores her in return. And after years of managing fine on her own, running a successful business, raising her son, and caring for her elderly mother, she feels she deserves some happiness. And who better to provide it than charming, fun-loving Robin?

She expected everyone to be delighted for her. But her friends and family are suspicious of Robin. And Rebecca, a desperate single mother who Cath has hired as a live-in housekeeper, doesn’t trust him either. He’s too slick, he’s too perfect and it all happened too fast… how well does Cath really know him?

Cath is used to taking care of herself; she’s nobody’s fool. But when things start to go wrong in the house that’s been her haven for all these years, she’s forced to ask herself whether the man she loves is really what he seems… And having let Rebecca in to every part of her life, is Cath ready to face the secrets she might find there?

As I stood at my own birthday party, listening to my husband’s speech about me, I could no longer silence the thought that had started as a low-level hum five years ago and built until I could no longer ignore it… I had to leave him.

After decades of putting her family first, Steph has realised that the only way to complete her own happiness is to break her family apart. As she stands amongst friends, celebrating her birthday, she knows that she cannot stay with her husband Mal. But she is painfully aware that the one friend missing from the party is the most important one: Evie. The one who could give Steph the support she needs to embark on a new chapter of her life. The one she hasn’t spoken to for over twenty years since a sunny weekend on a holiday beach, when Steph and Evie said things to each other that could never be unsaid.

As Steph considers whether or not she can leave Mal, she receives a letter from Evie, seeking a reunion and a way to repair the friendship. But this reunion threatens to reveal a secret that could destroy two families.

Could you take in your best friend’s child, even if it risked destroying your own family?

Jo had thought that her life – and her heart – was full. With a busy job, a husband and a teenage daughter who is going off the rails, keeping her life running smoothly had already felt hard enough.

But now Jo sits at the funeral of her best friend Ginny, crushed by the loss of a friendship that had endured for thirty years: from college and their first days at work through to settling down and raising their own children.

Against her husband’s wishes, Jo has made a life-changing decision: to take in Ginny’s teenage son Victor and raise him as her own. Despite her misgivings, Jo feels she had no choice: Ginny was a single parent and Victor had no other family who could take care of him.

But Victor’s arrival is about to break open the fragile cracks that were already forming on the surface of Jo’s family life and in her small rural community… and expose a secret that has remained hidden for many years, with devastating consequences.

The Mother I Could Have Been

Why would you walk away from the one person you can’t live without?

As a child, Vicky Hall never had the kind of family she wanted. The least important person in her new step-family, ignored by her mother in favour of her two younger half-siblings, Vicky was always an afterthought. Sitting alone at her graduation ceremony at the age of twenty-one, she vows to create her own family and her own life, one which is full of the love and attention she has always craved.

When Vicky meets William and falls pregnant in Greece that summer, it isn’t planned. But the two of them believe they can make it work, showering their child with the love which they believe should be enough.

But when her son Theo is three, Vicky leaves him in the care of her mother-in-law, walks out of her front door and drives to a hotel where she takes a room for the night. She doesn’t return.

What kind of mother does that?

The kind who is hiding a story you can never imagine.

The Mother I Could Have Been is a heartbreaking story of impossible decisions and second chances, from the bestselling author of The Silent Wife and The Woman I Was Before. Perfect for fans of Jodi Picoult, Liane Moriarty and Diane Chamberlain.

The Woman I Was Before

Of all the emotions single mother Kate Jones feels as she walks into her brand new house on Parkview Road, hope is the most unexpected. She has changed her name and her daughter’s, and moved across the country to escape the single mistake that destroyed their lives.

Kate isn’t the only woman on the street starting afresh. Warm, whirlwind Gisela with her busy life and confident children, and sharp, composed Sally, with her spontaneous marriage and high-flying career, are the first new friends Kate has allowed herself in years. While she can’t help but envy their seemingly perfect lives, their friendship might help her leave her guilt behind.

Until one day, everything changes. Kate is called to the scene of a devastating car accident, the consequences of which will test everything the women thought they knew about each other, and themselves.

Can Kate stop her own secrets from unravelling, or was her hope for a new life in vain?

Just for a moment, I was young and invincible again, back before I made the decision that changed the rest of my life…

Susie was forced to do something she will always regret: giving her baby son up for adoption. Everything that led to this child, this choice, had to be buried and forgotten.
Her secret echoes down through the years, tainting everything it touches. Her husband wonders why his wife is so distant. Her daughters can’t understand their changeable mother.

Susie knows her past is pushing her family apart, and the guilt is eating her up, but she can’t escape the longing for her lost son. No-one but Susie knows the whole story, and when her daughters discover a piece of the puzzle, she must face the question she has struggled with for most of her life:

Would the truth bring them back together, or break them?

From the bestselling author of The Silent Wife, The Secret Child is a heartbreaking and unputdownable novel about family secrets and lies. Perfect for fans of Liane Moriarty, Jojo Moyes and Diane Chamberlain.

Would you risk everything for the man you loved? Even if you knew he'd done something terrible?

A heart wrenching and gripping tale. I was hooked from the very first page.' Write Escape

Lara’s life looks perfect on the surface. Gorgeous doting husband Massimo, sweet little son Sandro and the perfect home. Lara knows something about Massimo. Something she can’t tell anyone else or everything Massimo has worked so hard for will be destroyed: his job, their reputation, their son. This secret is keeping Lara a prisoner in her marriage.

Maggie is married to Massimo’s brother Nico and lives with him and her troubled stepdaughter. She knows all of Nico’s darkest secrets – or so she thinks. The one day she discovers a letter in the attic which reveals a shocking secret about Nico’s first wife Caitlin. Will Maggie set the record straight or keep silent to protect those she loves?

For a family held together by lies, the truth will come at a devastating price.

An addictive and gripping read about love, life and living a lie.

One little lie can make one big difference …

Lydia has the ‘right’ kind of friends, her children are at the ‘right’ kind of school and she’s married to the ‘right’ sort of man – kind, steady, reliable Mark. Her wedding business is flourishing and even though she is at loggerheads with her mother, she couldn’t ask for anything more from life.

But the truth is that Lydia has been lucky. She has been living a lie for years and Mark has no idea who he is really married to. But nothing lasts forever and the past has a funny way of catching up with the present. When the person who knows all of Lydia’s dark little secrets turns up at the school gates, his presence threatens to blow Lydia’s life apart.

What is Lydia’s terrible truth? Once the secret is out, you can’t put it back …

Can one woman’s marriage survive her best friend’s divorce? Fans of Veronica Henry and Erica James, this is the next book to add to your reading list.

It’s time to get back to where it all began…

Octavia Sheldon thought she’d have a different life. One where she travelled the world with an exotic husband and free-spirited children in tow. But things didn’t turn out quite like that.

Married to safe, reliable Jonathan, her life now consists of packed lunches, school runs and more loads of dirty washing than she ever thought possible. She’s not unhappy. It’s just that she can barely recognise herself any longer.

So as Octavia watches her best friend’s marriage break up, it starts her thinking. What if life could be different? What if she could escape and get back to the person she used to be? Escape back to the island where she spent her summers? And what if the man she used to love was there waiting for her…?

The Not So Perfect Mum

Feisty Maia is a cleaner for ladies who lunch.

She spends her life wiping up spilt Sauvignon Blanc and vacuuming around handbags before rushing back home to run around after her children's hopeless father on an estate where survival depends on your ability to look the other way.

But an unusual inheritance catapults her into a different world where the rules are different. It seems no child can survive without organic apricots and Kumon maths classes and no woman can contemplate a week without pilates and pedicures.

As she dashes from coffee mornings to her mops and buckets, she is drawn to the one man who can help her family fit in.

But is his interest in her purely professional or will her modern My Fair Lady experiment end in disaster?