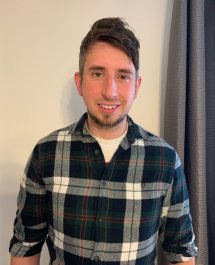 Jonny Grant has a degree in English Studies with a Major in Screenwriting, as well as a Masters in Creative Writing from Teesside University.

He is a screenwriter whose first film The Dare (dir. Giles Alderson, prod. Nu Boyana Studios) premiered at the Popcorn Frights Festival in Miami in August 2019 where it jointly won the Audience Choice Award.

He is currently working on AINAA for Black Cat Films (prod. Gita Bhalla Singh) and on his original screenplays. He has worked with Signature Entertainment, Parkhouse Pictures and is a full member of the WGGB.

THE DARE is a classic locked room horror. Kidnapped from the safety of his home, Jay (Bart Edwards, THE SINGAPORE GRIP/ Mammoth Screen) regains consciousness to find himself chained to the wall of a cold and filthy basement. He’s not alone – there are three others with him, also chained up and bloodied.

Why are they here? What could they have done to deserve this hell? As the sands run out on their time together, Jay and his fellow captives unravel the threads to uncover how they are connected, and how once upon a time, they did something that brought them to this violent and bloody place.

To hear more about the film, head over to the Filmmakers podcast to hear Jonny chat about the premiere and the film production process: http://thefilmmakerspodcast.com/tag/jonny-grant-on-writing-the-dare/