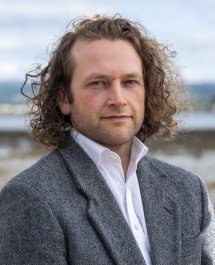 G.R. Halliday was born in Edinburgh and grew up near Stirling in Scotland. He spent his childhood obsessing over the unexplained mysteries his father investigated, which proved excellent inspiration for his debut novel. He now lives in the rural Highlands outside of Inverness, where he is able to pursue his favourite past-times of mountain climbing and swimming in the sea, before returning to his band of semi-feral cats.

Annabelle has come to the Scottish Highlands to escape. But as she speeds along a deserted mountain road, she is suddenly forced to swerve. The next thing she remembers is waking up in a dark, damp room. A voice from the corner of the room says 'The Doctor will be here soon'.

Scott is camping alone in the Scottish woodlands when he hears a scream. He starts to run in fear of his life. Scott is never seen again.

Meanwhile DI Monica Kennedy has been called to her first Serious Crimes case in six months - a dismembered body has been discovered, abandoned in a dam. Days later, when another victim surfaces, Monica knows she is on the hunt for a ruthless killer.

But as she begins to close in on the murderer, her own dark past isn't far behind ...

A stunning, atmospheric police procedural set against the grit of Inverness and the raw beauty of the Scottish Highlands, this is the first book in the DI Monica Kennedy series.

Sixteen-year-old Robert arrives home late. Without a word to his dad, he goes up to his bedroom. Robert is never seen alive again.

A body is soon found on the coast of the Scottish Highlands. Detective Inspector Monica Kennedy stands by the victim in this starkly beautiful and remote landscape. Instinct tells her the case won’t begin and end with this one death.

Meanwhile, Inverness-based social worker Michael Bach is worried about one of his clients whose last correspondence was a single ambiguous text message; Nichol Morgan has been missing for seven days.

As the Scottish Highlands prepare for a rare meteor shower, Michael keeps searching for Nichol as Monica is faced with catching a murderer that has been meticulously watching their victims and is ready to kill again.