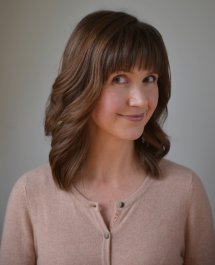 Egan Hughes was born in North Devon and grew up in Southsea, Hampshire. She is now based on the South Coast of England and works in marketing as a freelance copyeditor. An early version of THE ONE WHO GOT AWAY was shortlisted for the First Novel Prize and the most recent Richard and Judy Search for a Bestseller Competition.

Leave the Lights On

Their new 'smart home' is Joe's dream. A remote cottage where everything - from the lighting to the locks - is controlled through an app. It's the perfect blend of old-world charm and modern convenience. What better place for them to escape after all Lauren's trauma?

Lauren desperately wants Joe to be happy after all she's put him through, so she doesn't tell him how much she hates being so dependent on technology. How vulnerable it makes them.

Then 'the incidents' begin.

Joe thinks Lauren is the victim of her own fevered imagination. But Lauren can't be sure. She doesn't believe in ghosts, but she also knows the past rarely stays buried. And she is haunted by one question:

Is their past finally catching up with them?

The One That Got Away

You love him. You trust him.
YOU CAN'T ESCAPE HIM.

Mia thinks she has escaped her controlling ex-husband, Rob. She's found herself a new home, a new boyfriend and a new life.

But when the police arrive to tell her that Rob has been found dead on his boat, things quickly fall apart. Mia is terrified she'll be suspected, however the police are keeping all options open. They know Mia had reason to hate her ex-husband, but she's not the only one. Plenty of people wanted Rob Creavy dead, not least his new wife, Rachel.

What they don't know is that Mia has a secret, one she's desperate to protect.

But someone else knows. Someone with very dark secrets of their own .