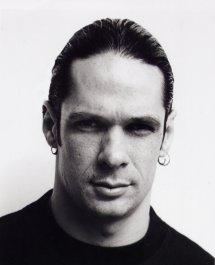 His first major career change came when he moved to LA to pursue a music career. After ten successful years playing in bands, Chris finally turned to his true passion – writing!

His novels have been both German and Danish bestsellers, selling over 1,000,000 copies in Germany! He is also a UK No.1 Bookseller Fiction Heatseeker and has topped the supermarket charts in the No.1 spot. One by One and I Am Death were immediate Sunday Times Top 10 bestsellers, whilst The Caller, the 9th in the Robert Hunter series was a No 1 Sunday Times bestseller and No 3 on the Spiegel Bestseller Chart in Germany.

His most recent novel, Gallery of the Dead, was a No 4 Sunday Times Bestseller and spent the 7 weeks after publication in the Top 20!

A serial killer will stop at nothing…

The Killer
His most valuable possession has been stolen.
Now he must retrieve it, at any cost.

The Girl
Angela Wood wanted to teach the man a lesson. It was a bag, just like all the others.
But when she opens it, the worst nightmare of her life begins.

The Detective
A journal ends up at Robert Hunter’s desk. It soon becomes clear that there is a serial killer on the loose. And if he can’t stop him in time, more people will die.

If you have read it
You must die

'Every story one day comes to an end.'

As roommates, they met for the first time in college. Two of the brightest minds ever to graduate from Stamford Psychology University.

As adversaries, they met again in Quantico, Virginia. Robert Hunter had become the head of the LAPD’s Ultra Violent Crimes Unit. Lucien Folter had become the most prolific and dangerous serial killer the FBI had ever encountered.

Now, after spending three and a half years locked in solitary confinement, Lucien has finally managed to break free. And he’s angry.

For the past three and a half years, Lucien has thought of nothing else but vengeance.

The person responsible for locking him away has to pay, he has to suffer.

That person ... is Robert Hunter.

And now it is finally time to execute the plan.

Gallery of the Dead

‘Thirty-seven years in the force, and if I was allowed to choose just one thing to erase from my mind, what’s inside that room would be it.’

That’s what a LAPD Lieutenant tells Detectives Hunter and Garcia of the Ultra Violent Crimes Unit as they arrive at one of the most shocking crime scenes they have ever attended.

In a completely unexpected turn of events, the detectives find themselves joining forces with the FBI to track down a serial killer whose hunting ground sees no borders; a psychopath who loves what he does because to him murder is much more than just killing – it’s an art form.

Welcome to The Gallery of the Dead.

After a tough week, Tanya Kaitlin is looking forward to a relaxing night in, but as she steps out of her shower, she hears her phone ring. The video call request comes from her best friend, Karen Ward. Tanya takes the call and the nightmare begins.

Karen is gagged and bound to a chair in her own living room. If Tanya disconnects the call, if she looks away from the camera, he will come after her next, the deep, raspy, demonic voice at the other end of the line promises her.

As Hunter and Garcia investigate the threats, they are thrown into a rollercoaster of evil, chasing a predator who scouts the streets and social media networks for victims, taunting them with secret messages and feeding on their fear.

Seven days after being abducted, the body of a twenty-year-old woman is found on a green patch of grass by the Los Angeles International Airport. She has been left with her limbs stretched out and spread apart, placing her in a five-point human star.

The autopsy reveals that she had been tortured and murdered in a most bizarre way. But the surprises don't end there. This killer likes to play and he left a note lodged inside his victim's throat.

Detective Robert Hunter, who leads LAPDS's Special Section, Ultra Violent Unit, is assigned the case. But almost immediately a second body turns up. Hunter knows he has to be quick.

Surrounded by new challenges as every day passes, Detective Hunter finds himself chasing a monster. A predator whose past hides a terrible secret, whose desire to hurt people and thirst for murder can never be quenched - for he is DEATH.

A freak accident in rural Wyoming leads the Sheriff's Department to arrest a man for a possible double homicide.

Further investigations suggest a much more horrifying discovery - a serial killer who has been kidnapping, torturing and mutilating victims all over the United States for at least twenty-five years.

The suspect claims he is a pawn in a huge labyrinth of lies and deception. Can he be believed?

The case is immediately handed over to the FBI, but this time they're forced to ask for outside help. Ex-criminal behaviour psychologist and lead detective with the Ultra Violent Crime Unit of the LAPD, Robert Hunter, is asked to run a series of interviews with the apprehended man.

These interviews begin to reveal terrifying secrets that no one could have foreseen, including the real identity of a killer so elusive that no one, not even the FBI, had any idea he existed… until now.

Detective Robert Hunter of the LAPD's Homicide Special Section receives an anonymous call asking him to go to a specific web address - a private broadcast.

Hunter logs on and a show devised for his eyes only immediately begins. But the caller doesn't want Detective Hunter to just watch, he wants him to participate, and refusal is simply not an option.

Forced to make a sickening choice, Hunter must sit and watch as an unidentified victim is tortured and murdered live over the Internet. The LAPD, together with the FBI, use everything at their disposal to electronically track the transmission down, but this killer is no amateur, and he was more than prepared for it.

Before Hunter and his partner Garcia are even able to get their investigation going, Hunter receives a new phone call. A new website address. A new victim. But this time the killer has upgraded his game into a live murder reality show, where anyone can cast the deciding vote.

Meet Robert Hunter, the youngest Homicide Detective the Los Angeles Police has ever recruited, on his first day.

As a rookie, he is given a simple suicide investigation to cut his teeth on. But when he arrives at the scene, he swiftly begins to suspect that something is not quite right.

Despite the fact that the door was locked from the inside, and there is no other way out of the apartment, Hunter has a hunch that the victim did not commit suicide.

But with a new Captain to impress and the evidence stacked against him, Hunter has a lot to prove if he is to solve the case and keep his place on the team.

The Hunter is a thrilling ebook exclusive short story, published on January 17th 2013.

A student nurse has the shock of her life when she discovers her patient, prosecutor Derek Nicholson, brutally murdered in his bed. The act seems senseless - Nicholson was terminally ill with only weeks to live. But what most shocks Detective Robert Hunter of the Los Angeles Robbery Homicide Division is the calling card the killer left behind. For Hunter, there is no doubt that the killer is trying to communicate with the police, but the method is unlike anything he's ever seen before. And what could the hidden message be?

Just as Hunter and his partner Garcia reckon they've found a lead, a new body is found - and a new calling card. But with no apparent link between the first and second victims, all the progress they've made so far goes out of the window. Pushed into an uncomfortable alliance with the confident Alice Beaumont, Hunter must race to put together the pieces of the investigation ...before the Death Sculptor puts the final touches to his masterpiece.

An unidentified female body is brought into the Los Angeles County morgue. The cause of death is still unclear.

Her body bares no marks; except for the fact that her most intimate parts have been stitched shut. But what shocks the pathologist the most is that the killer had left something inside her. Something so monstrous Detective Robert Hunter, of the Los Angeles Homicide Special Section, has to be pulled off a different case to take over the investigation.

Within days a new body surfaces. Like the previous victim, she's also been stitched shut and something has been left inside her. Something as ingenious as it is grotesque. And the killer isn't done yet, not by a long shot.

When his inquiry collides with a missing persons' case being investigated by the attractive, razor-sharp Whitney Meyers, Hunter suspects the killer might be keeping several women hostage. Soon Robert finds himself on the hunt for a murderer who is much more monstrous than he ever could have expected; a predator whose past hides a terrible secret, and who won't stop until each of his victims has brought forth the awful truth that lies hidden deep inside them too.

Inside a Los Angeles church, on the altar steps, lies the blood-soaked, decapitated body of a priest. Carefully positioned, legs stretched out, arms crossed over the chest, the most horrifying thing of all is that the priest's head has been replaced by that of a dog. Later, the forensic team discover that, on the victim's chest, the figure 3 has been scrawled in blood.

At first, Detective Robert Hunter believes that this is a ritualistic killing. But as more bodies surface, he is forced to reassess. All the victims died in the way they feared the most. Their worst nightmares have literally come true. But how could the killer have known? And what links these apparently random victims?

Hunter finds himself on the trail of an elusive and sadistic killer, somone who apparently has the power to read his victims' minds. Someone who can sense what scares his victims the most. Someone who will stop at nothing to achieve his twisted aim.

When the body of a young woman is discovered in a derelict cottage in the middle of Los Angeles National Forest, Homicide Detective Robert Hunter finds himself entering a horrific and recurring nightmare.

Naked, strung from two parallel wooden posts, the victim was sadistically tortured before meeting an excruciatingly painful death. All the skin has been ripped from her face - while she was still alive. On the nape of her neck has been carved a strange double-cross: the signature of a psychopath known as the Crucifix Killer. But that's impossible. Because two years ago, the Crucifix Killer was caught and executed. Could this therefore be a copycat killer? Or could the unthinkable be true? Is the real killer still out there, ready to embark once again on a vicious and violent killing spree, selecting his victims seemingly at random, taunting Robert Hunter with his inability to catch him?

Hunter and his rookie partner are about to enter a nightmare beyond imagining.